The theme of 'place' in Aqdas 1

I have done my own translation of paragraph one of the Kitab-i Aqdas and am now ready to share it and say something about it. The ideas about 'place' that I discuss below form a part of a book I am working on about the mystical path.

Here is the Arabic of Aqdas 1:


Here is my translation:

"The first of what God prescribed for the servants is acknowledgment of the place from which God’s revelation rises and his command emerges. This place constitutes the self of God in the worlds of command and creation. The person who achieves acknowledgment of this place has gained all good. The person who refuses is among the people of error, even if that person performs all good deeds. Should anyone reach this most elevated position and imposing outlook, it is incumbent on that one to follow what is commanded of them in the presence of the Ultimate Purpose. For the two go together; one is not received without the other. This is what the source of inspiration has determined."

The most striking thing for me about Aqdas 1, which I discovered when I worked on the translation, is the theme of 'place' that runs through it. What I mean by this is that, in the paragraph, Baha'u'llah describes an event that is happening in a 'place'. That place is the heavenly realm and the event that Baha'u'llah describes happening there is an encounter between the divine and the soul of the person reading the text of the paragraph. The idea is that, when a person reads the paragraph, that person's soul actually participates in the event that is being described. This active involvement in the drama of the text by the soul enables the true meaning of the words to be communicated to the soul. The meaning is not a collection of concepts conveyed to the intellect through words; it is the transforming influence the soul sustains when it experiences its encounter with its Lord.

The theme of place begins strongly in the first sentence: "The first of what God prescribed for the servants is acknowledgment of the place from which God’s revelation rises and his command emerges." This sentence sets up the stage and location for the drama. The reader is invited to come to a very special place. Baha'u'llah does not say where that place is; instead, he gives information about the nature of the place he is inviting the reader to come to. He describes it as: "the place from which God’s revelation rises and his command emerges." Clearly, this is a very great spiritual place, for it is where divine activity seems to originate. In the next sentence, Baha'u'llah underscores just how sacred this place is: it is the place that stands for, or constitutes, the self of God in the worlds of command and creation. So, effectively, for everything in those two worlds, this place is God.

How is someone to find this place? Baha'u'llah simply asks the reader to "acknowledge" it (see below for my use of "acknowledgment" here). This challenges the reader to find, and then inhabit, a place within their own self where they acknowledge openly and with solemnity something that is the Source of inspiration and authority. I think that this is an allusion to the scene in pre-existence where all human beings stand before God and acknowledge the eternal covenant.

Baha'u'llah continues his depiction of the mystical event a couple of sentences further on. Whenever a reader finds and acknowledges this place - this placeless place of the Source of revelation and authority - suddenly the reader's soul is thrown into the drama of the text and finds itself a principal character in the climax of the story:

"Should anyone reach this most elevated position and imposing outlook...."

Now Baha'u'llah addresses the one who has entered this mysterious place, and he describes the position this person finds themselves standing in: it is the most elevated position and one with the most imposing outlook. These attributes suggest that the person is standing in a very formidable place indeed, for it is a place that is higher than anywhere else and has the most mind-blowing view. This ultimate grandeur forms the backdrop for the climactic scene of encounter that is about to take place. 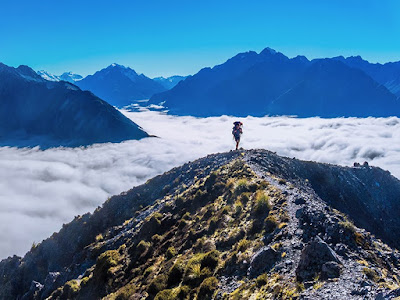 Imagine it: you are standing at the topmost height of creation and you are looking down at the panorama that is all created things. Absolutely everything you have known up to this moment drops away before you. Now, in this place, you are told:

"... it is incumbent on that one to follow what is commanded of them..."

What is happening? Someone is speaking to you. Who else is in the scene? Baha'u'llah goes on:

"... in the presence of the Ultimate Purpose."

You are standing in the presence of God, of course. Baha'u'llah has already explained that this place constitutes the self of God. And the name of God that you are standing before is the name of God, the "Ultimate Purpose"[1]. In the climax of this most fantastic of all scenes, the soul stands before the Ultimate Purpose and is informed of what it was created to do. This is its purpose and destiny.

Then the reader comes to the enigmatic statement:

"For the two go together; one is not received without the other."

Again, there is an allusion to place here. A person does not enter another person's home unless the owner receives them. The same applies here. The reader stands in the most exalted spot in the presence of God only with God's leave. One does not just turn up. We are invited to come by finding the requisite humility, honesty and vision within ourselves. If we accomplish this, then we are permitted to enter. We are received. And at that point (because the two go together), something else is received also: the deeds we are asked to carry out in view of that celestial meeting. It is the encounter that gives our deeds meaning and makes them right. And this is an ongoing process. If, at any time, we stop acknowledging and fall out of the presence of God due to our negligence, our deeds (even the same ones) stop being acceptable also.

To sum up: if a person fails to humble themselves and acknowledge the Source of revelation and authority, they will never be received into the presence of the Ultimate Purpose and will never know their purpose and have their deeds accepted. Whatever that person does will be a product of self. For this reason: "The person who achieves acknowledgment of this place has gained all good." And "The person who refuses is among the people of error, even if that person performs all good deeds."

[1] "Ultimate Purpose" translates al-maqṣūd, which has the range of meanings (from Hans Wehr): "aimed at, intended, intentional, designed". The root carries the meaning 'to go or proceed straightaway to someone or something'. As a name of God, it is also translated as 'the Desired One', 'the Intended One'. I chose "Ultimate Purpose" because it refers to the place where God's command emerges and the soul is given its instructions. Another possible translation is 'Ultimate  Goal'.

Translation of the word `irfān

"The first of what God prescribed for the servants is acknowledgment (`irfān) of the place from which God’s revelation rises and his command emerges."


I have chosen to translate the verbal noun `irfān as "acknowledgment", in the place where the Guardian used "recognition". While I was researching this word, I discovered some interesting things about it, which lead me to prefer the translation "acknowledgement".

But in the end, what pushed me fully in favour of "acknowledgment" was the fascinating information I found in Lane's dictionary of classical Arabic (p2012). It says that the contrary of `irfān is 'inkār, which means 'denial', 'disapproval', 'rejection'. These struck me as the opposites of "acknowledge, avow, confess"; in other words, the opposite of a person acknowledging or confessing to something is their denial and rejection of it. The idea that 'inkār is the contrary of `irfān also works with the text of the paragraph, where Baha'u'llah effectively gives his own contrary in his use of the word mana`a ( الّذي منع "the one who has refused"), which Steingass gives as "to refuse; hinder, prevent" etc.

Email ThisBlogThis!Share to TwitterShare to FacebookShare to Pinterest
Labels: commentary on the writings, translations

First of all may Dearest Alison I would like to thank you for sharing your in depth translation of a very interesting and thought provoking passage conveying the very essence of the path of spiritual enlightenment. Alison once again you have shown bravery and tenacity in having the courage of conviction to follow your heart's lead.

On the beautiful passage you have so lovingly translated may l share a few personal thoughts and meditations that come to mind.
The time and place in reference to the said passage like most related spiritual matters often has two connotation. One pertaining to a physical time and place and the other being a purely spiritual revelation or transition from a lower to higher state of being or in the case of a messenger of God the highest state of human development (enlightenment/samdi).

In reference to the former in a particular time and place. One might consider for example, Adam and Eve eating the fruit of the tree of Knowledge in the garden of Eden.

God's call and establishing his covenant with Abraham in Genesis 12.

12 Now the Lord had said unto Abram, Get thee out of thy country, and from thy kindred, and from thy father's house, unto a land that I will shew thee:

2 And I will make of thee a great nation, and I will bless thee, and make thy name great; and thou shalt be a blessing:

3 And I will bless them that bless thee, and curse him that curseth thee: and in thee shall all families of the earth be blessed.

4 So Abram departed, as the Lord had spoken unto him;

Moses encounter with the burning bush on mount Sinai.

Muhammad's revelation from the archangel Gabriel in the cave of Hira.


Bahá'u'lláh imprisoned in a prison with a very significant name: the Siyáh-Chál, or Black Pit. It had previously been a reservoir for the public bath.

The following is pasted from a BBC site which sums up very much what want l wanted to conclude with other than. The revelation, message and the command to go forth is operating at all times throughout all the world's of God in both materially and spiritually and at all stages of human development.

'His experiences (Bahá'u'lláh) in this dreadful place have close parallels with the descendent of the Holy Spirit in the form of a dove on Jesus, the appearance of the Angel Gabriel to Muhammad in the cave on Mount Hira, and the enlightenment of the Buddha under the Bo tree.

While in prison, Bahá'u'lláh had a vision of the 'Most Great Spirit' in the form of a heavenly maiden who assured him of his divine mission and promised divine assistance.

Bahá'u'lláh himself wrote that he had the feeling of something glowing from the crown of his head and of hearing words of protection and victory.

This is as significant for the Bahá'í revelation as the visitation of Gabriel which caused Muhammad such consternation, or the vision of God that caused Moses to swoon.

This event is regarded by Bahá'ís as marking the birth of the Bahá'í revelation. It stands at the heart of Bahá'u'lláh's claim to be the Manifestation of God.