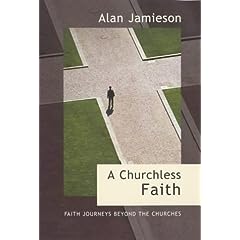 I am indebted to a good friend of mine for telling me about a guy called Alan Jamieson, who has done extensive research into the process people go through when they leave evangelical pentecostal/charismatic churches in New Zealand. Alan is a pastor and a sociologist. His PhD, submitted in 1998, is titled "A Churchless Faith. Faith outside the Evangelical Pentecostal/Charismatic church of New Zealand". He has done much more research into these areas and other Christian-related issues since then, and it seems that he is supported financially in this work by the Portland Research Trust. Alan Jamieson, and a friend of his, also maintain a blog, called "Prodigal Kiwi(s) Blog". Alan has also written several books - his PhD was published as "A churchless faith". But he has written several other books since then. They are listed on the blog homepage.
I have just begun reading Alan's PhD and recommend it. Firstly, it is an example of what can be produced when someone does real sociological research into people leaving a community; it is not the pseudo-sociology produced by Moojan Momen in his "Apostasy" article. And, interestingly, for the first three years that Alan did the research, he was a pastor at a large evangelical charismatic church. This did not stop him from producing truly academic work. Another contrast with Moojan's article is that Alan carried out actual interviews with 108 leave-takers, listening to them sympathically and basing his results on what they said. The result is very interesting indeed; particularly, when one compares their stories and situations with those that unenrolled Baha'is and ex-Baha'is have been through.
I have not read the PhD right through yet, but have had a look to get the gist of it. In the Introduction, Alan points out that, although the evangelical Pentecostal/charismatic churches (EPC) are the fastest growing of the Christian churches, at the same time, they are also losing about 10% of their followers per annum (through the 1990s, when this research was done). These are called the 'back door losses' (p16) and the research is focused on who these people are and why they are leaving. With regard to research done in the area of disaffiliation, Alan points out that:


"the majority of disaffiliation research from any religious group has been drawn from census and survey data. There is little evidence of qualitative research focused on the methods of face-to-face interviews and participant observation. This research therefore set out to open up the understandings of the leavers from this growing stream of the Christian church - the evangelical Pentecostal and charismatic churches by the use of qualitative research." p17

Alan interviewed 54 'informed insiders'. These were pastors and counsellors in the church who had dealt with leave-takers as part of their work, as well as some lecturers in theological colleges and universities(p20). Alan was keen to establish what these insiders believed were the reasons why people left church. He also explains that previous research puts those leaving church into three categories: those on the fringe, the young, and those linked to church for a short period of time. Alan's research revealed that, of the 108 leave-takers he spoke to, the majority were middle aged (between 35 and 45 years), had been involved in the church for a long time (an average of 15.8 years over all interviewees) and had been highly committed to it(p19). All interviewees had made adult decisions to join the church; they were not brought up in it(p26). Many were married, well educated and had stable work. Moreover -

"the majority of these leavers are not moving to a position of apostasy, (i.e. no longer holding to a Christian faith) but like Stuart and Michelle are retaining their faith while leaving the church. They are also, like Stuart and Michelle, unlikely to return to an evangelical or Pentecostal/charismatic church again. This raises an interesting question - what characterises the post-church faith of these leavers? This is a question upon which the research focuses much of its attention..." (p33)

Using categories developed in James Fowler's faith development theory as a guide (ch4), Alan looks at the faith journey the leave-takers took after leaving the church. Of the 108 interviewed, 8 ceased to believe in the teachings of the Christian church. This left 100 interviewees, which Alan divided into four categories:
Chapter 10 looks at the faith-related groups that the leave-takers participated in after leaving church. Some created and/or participated in devotional and discussion groups, which had a significant influence on the process they went through to find their feet again. Chapter 11 looks at the leave-taking in the light of macro issues such as secularisation, modernism and postmodernism.
The work is full of quotes from the leave-takers, which make enlightening reading for those interested in what a person goes through when they leave a faith community, voluntarily or forcibly. The rawness of the accounts gives the lie to those who say that leaving the Baha'i community is just 'a voluntary act', 'not a punishment'.


"Stephen Crittenden [interviewer]: Two of the most interesting broad ideas that you speak about are the idea of the church as a voluntary society that people can leave these days if they don't agree. Could you expand on that a bit?

Geoffrey Robinson: Well one of the problems is that a whole lot of people do leave the church; we know that, in vast numbers people have left the church. One unfortunate side effect of that is that the force for change has left the church...”