A mystical look at organic unity 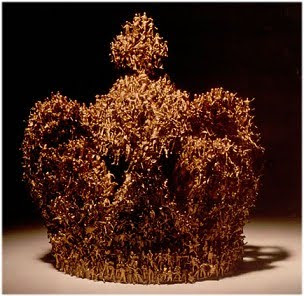 The passage quoted by Sen, and the one Baha'is would most likely point to, is this one:

"Regard ye the world as a man’s body, which is afflicted with divers ailments, and the recovery of which dependeth upon the harmonizing of all of its component elements." (Summons p80)

The fundamental idea seems to be that we should regard humanity as a body. This is backed up by other important passages, such as this one from paragraph 58 of the Aqdas:

"Beware lest the desires of the flesh and of a corrupt inclination provoke divisions among you. Be ye as the fingers of one hand, the members of one body."

From the passage in Summons, we also get the idea that 'health' is a matter of harmony: "the recovery of which dependeth upon the harmonizing of all of its component elements". For me, this is where the idea of 'unity' comes in. A body is 'united' if it is in harmony. This is important because one might think that a body, such as that of a person which is stuck together by skin and bone, is already a 'unity' because it is an indivisible physical unit. But no, just because it is a unit, doesn't mean it is united, because its parts may not be in harmony. And, as Sen forcefully argues in the Church and State passage, unity does not mean that one organ rules the others, but rather that each organ has it own distinct role to play: "the brain cannot become a circulatory system, or instruct the liver to grow according to any pattern other than that 'idea' of a liver that is coded into every cell. It would be unhealthy even to try."(p254)

Baha'u'llah focuses on the idea of harmony in this other quote, which he starts in a similar way to the Summons quote above, but finishes differently.

"Regard the world as the human body which, though at its creation whole and perfect, hath been afflicted, through various causes, with grave disorders and maladies. Not for one day did it gain ease, nay its sickness waxed more severe, as it fell under the treatment of ignorant physicians, who gave full rein to their personal desires and have erred grievously. And if, at one time, through the care of an able physician, a member of that body was healed, the rest remained afflicted as before." (Summons pp 90-91)

This passage underscores again the idea that health means the harmony of parts. It's not sufficient to heal one part, the whole must be healed and put into in balance.

The reason I got to thinking about the meaning of 'organic unity' was due to my recent meditations on gardening and, in particular, the garden of deeds and its fruits. Added to that was the idea of recycling, which has forced me to think about what I do with waste, and also how that ties in with the idea of composting. I think what I want to do is apply the concept of 'organic unity' to our deeds and the way we live our lives; that is, our lives are like a body and our deeds are like the organs. The body of our life is made up of distinct but related deeds, and a 'healthy' life is one in which our deeds are in harmony. A life lived in this state is a united one.

A story that got me thinking along these lines reportedly comes from Abdu'l-Baha (it may not, but that doesn't matter). It is quoted in a book by a German Baha'i therapist called Nossrat Peseschkian in the book "In Search of Meaning. A Psychotherapy of Small Steps". He begins the book with this story, which he attributes to Abdu'l-Baha and titles "About Eternal Life":

"A mighty king wandered for a long time though his kingdom. On a sunny slope he saw a venerable old man bent over, hard at work. Followed by his courtiers, the king came nearer and saw that the old man was planting year-old seedlings. "What are your doing there?" the king inquired. "I'm planting date trees," replied the old man. The king asked in amazement, "You are already quite old. Why are you planting seedlings when you won't see their foliage, won't rest in their shade, and won't eat their fruit?" The old man looked up and said, "Those who come after us planted, and we were able to harvest. Now we plant so that they who came after us can harvest. ..."

I was intrigued that this story was supposed to be about eternal life. Why is it about eternal life, I asked myself? Well, I think it has something to do with the fact that the old man, in his planting date trees, understood the reward for perfect deeds. In planting as he did, even though he was old and would not harvest the dates, his sole concern was to ensure that his deeds bore the quality of perfection. This perfection was the thing that attracted wealth, not the nature of the deed itself. I see him as a man whose deeds, and whose life, were in harmony. The wealth he attracted for this was immediate and eternal.

This reminds me of a pilgrim note, which I place much store by. It's from the memoirs of Ali-Akbar Furutan, and is number 60 in his book of memoirs. It gives four qualities of character that Baha'u'llah loved, and the fourth one is to finish what one starts:

The Blessed Beauty often remarked: "There are four qualities which I love to see manifested in people: first, enthusiasm and courage; second, a face wreathed in smiles and a radiant countenance; third, that they see all things with their own eyes and not through the eyes of others; fourth, the ability to carry a task, once begun, through to the end." The Stories Of Baha'u'llah, Compiled and Edited Ali-Akbar Furutan Translated by Katayoon and Robert Crerar with help from friends George Ronald Publisher, 1986, page 51

I often wondered why Baha'u'llah placed so much importance on finishing what one starts. Now I see it in the light of our deeds and life as an organic unity. Having a lot of unfinished tasks is like having a house full of stuff that has not been disposed of in a thoughtful fashion. In the end, the stuff accumulates and we end up living in a mess, or we throw away stuff that is still useful and should not be in landfill.

The habit of not finishing tasks is like society not taking the time to correctly process waste. Both involve a throw-away attitude. And both problems would be solved if we thought more about what we were doing and why, and believed ourselves to be committed to whatever we chose to do. Cleaning up afterwards is as much about doing a task as preparing for it. The loss to ourselves in not cleaning up afterwards is like the loss when we do not compost. Composting organic matter gives us a new rich soil that we can use for feeding and mulching crops in the following year. I think the same applies to finishing tasks: the clean up provides important resources and nutrients for the task we take up next.

The above might help to illustrate what I mean about seeing our lives in terms of an organic unity. The body of our life is healthy when we see our deeds as distinct organs of that body. These deeds need to be nurtured right through the process, from development, to maturity, to decline. All stages need planning, attention, nurturing, time and resources. For this reason, I have slashed by 90 percent the amount of things I try to do. If the fruit of action is in how we act and not in the nature of the act itself, then it is all gain to me to ensure my deeds are done well, rather than doing a million things and never getting any done properly.

I believe that this is having real benefits for my physical health too, which backs up the point that health is about harmony.