As you'll no doubt have realised, I am passionate about animal welfare issues. Treating animals with kindness is a Baha'i principle. I've noticed that many people who are passionate about animal welfare are also vegan. Vegans not only do not eat meat, but do not make use of other animal products either, such as eggs or milk, or leather for shoes. I think it's unfortunate for the animal welfare movement that it appears to be dominated by vegans. Many people can be won over to the idea that farm animals should be treated humanely, but many people don't see a problem with eating meat and think veganism is extreme.
I am pleased to be a member of WSPA (World Society for the Protection of Animals). It may be run by vegans for all I know, but such things are never mentioned in its animal welfare work. The organisation sticks to its purpose of preventing animal cruelty and leaves people to run their own lives. But other animal advocacy groups, such as the New Zealand organisation SAFE (Save Animals from Exploitation), also promote veganism. SAFE's board members "Ideally ... will possess a compassionate attitude for all life, a personal commitment to improving the wellbeing of all animals, and an understanding and belief in a vegetarian/vegan lifestyle." I've also found that many people discussing animal welfare on the Internet are vegan.
For example, I took a look at a lecture by Gary Yourofsky, an animal rights activist in the States, in which he outlines the philosophy behind his veganism. He relies heavily on the religious principles that we should do unto others as we'd have them do to us and that we should not kill. He widens the usual interpretation of these principles by arguing that they apply to animals as well as to humans. Gary argues that, when we say we should treat 'others' as ourselves, 'others' means animals as well as humans. He puts animals and humans in the same category, in that animals share the physical capabilities of humans, such as sensory organs and a brain, and the ability to experience trauma and distress too. It is therefore not right to kill such creatures. He believes that treating animals differently to humans is like racism; he calls it speciesism. "The term is mostly used by animal rights advocates, who argue that it is irrational or morally wrong to regard sentient beings as objects or property." Wiki
I see two separate issues here, which vegans conflate: one is animals living free of cruelty, and the other is killing animals for meat. In Gary's lecture, he forces his audience to watch what goes on in a slaughter house. He really lays it on thick in order to get people to feel disgusted about eating meat. But all along I am thinking that he's merging the two issues into one. For him, cruelty is the same thing as killing. All the abuse of animals that goes on in factory farming is just a prelude to the killing end game. The unavoidable conclusion is that everyone who eats meat is responsible for the horrific abuse of factory farm animals. It isn't smart politics to alienate people like me who really care about animal welfare.
I see Gary's view as a product of modern Western society. The idea that the 'do not kill' principle applies to animals is very modern. I'm not familiar with Old Testament law, which is where the principle comes from, but I can't imagine anyone who lived a thousand years before Christ ever imagined it applied to animals. Unlike people back then, people today have a very uncomfortable relationship with death. We hide it away in hospitals, homes and slaughterhouses. I know from my experience how difficult it was to accept the (humane) killing of some of my roosters. But in the end, it was good to go through that process because I gained more appreciation of life and the reality of death as a defining moment within it. (The latest craze about planking, where guys lie down flat and balance in dangerous places like railings, is a good example of how death is unreal to young men.)
As I understand Baha'i law, cruelty to animals is forbidden but eating meat is permitted:


"Burden not an animal with more than it can bear. We, truly, have prohibited such treatment through a most binding interdiction in the Book. Be ye the embodiments of justice and fairness amidst all creation." Baha'u'llah: Kitab-i-Aqdas, page and para 87)

"Briefly, it is not only their fellow human beings that the beloved of God must treat with mercy and compassion, rather must they show forth the utmost loving-kindness to every living creature. For in all physical respects, and where the animal spirit is concerned, the selfsame feelings are shared by animal and man. Man hath not grasped this truth, however, and he believeth that physical sensations are confined to human beings, wherefore is he unjust to the animals, and cruel." Selections ... `Abdu'l-Baha, pp 158-159)

"Say: O concourse of priests and monks! Eat ye of that which God hath made lawful unto you and do not shun meat. God hath, as a token of His grace, granted you leave to partake thereof save during a brief period [ie, the fast]. He, verily, is the Mighty, the Beneficent. Forsake all that ye possess and hold fast unto that which God hath purposed. This is that which profiteth you, if ye be of them that comprehend." Tablet to Napoleon III, in Summons para 154, p80

Based on the above, I agree with much of what Gary Yourofsky says. Yes, we should treat animals with infinite kindness and yes, they do suffer under cruelty just as humans do.
But is killing animals for food a form of cruelty? As I understand it, there is a fundamental difference between humans and animals. Humans have a soul, which means they are eternal life forms. When they die physically, they continue living in spiritual worlds forever. Animals do not have a soul. When they die physically, that is it for them. (Note though, that although animals do not have a soul, that does not mean they do not suffer under cruelty.)
The soul is also the vehicle behind our conscience and moral dimension. It's via the soul that a person has the ability to understand abstract concepts like justice, loving kindness and cruelty. Animals do not have a soul and therefore do not have the capacity to understand such concepts. They do not establish institutions to discuss the implications of these principles for the affairs of this world.
Animals, then, do not have a moral code that tells them not to be cruel to each other. My chickens will happily peck each other just to get an advantage over others. Little chicks are not protected, but picked on. As the farmer and the one with the moral code, it is me who interferes to ensure that the weakest in the flock get sufficient food and are protected. I think that, although humans and animals have much in common, we should avoid getting romantic about animals. We say they are innocent, but that is because they can't be held responsible if they are cruel. They don't know any better. They are not innocent because they are always kind. Animals kill each other for food, and always will. You can't tell an animal that this is cruelty. This shows that, despite shared sensory capacities, there is a fundamental difference between humans and animals.
Animals also do not understand the concepts of time - of past, present and future, and eternity. I noted someone saying that animals were eternal but humans not. But what is eternity to a creature that is created to be always in the present? A creature in the present is focused on whether life is good right now. If it is, all is well. They do not understand that they might be killed for food one day. They do not suffer weeks and years of terror in anticipation as a human would. Ideally, animals live very happy lives and then, maybe, one day, suffer a quick and painless death. That is that. 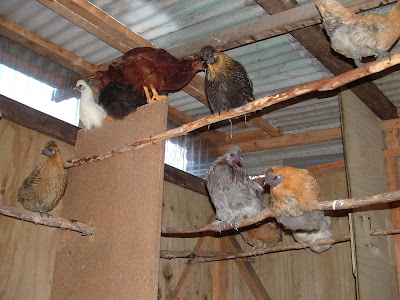 Some of my chickens in a house Steve built for them

But although I am not against meat-eating, I am wholly against factory farming, which is cruel. If we are to eat meat, the least we can do is ensure that the lives of the animals we benefit from are happy. Factory farming means high-density animal populations, and no animal will be happy living like that. Some 'free-range' farms house thousands of chickens in very large barns. In theory, the chickens are free range because they can go outside, but in practice very few do because that many chickens cannot get to the doors. For example, in theory, you can get 'out' when you are at a packed rock concert (the doors are not locked), but you only make the effort if you absolutely have to. Chickens are creatures of habit and if they are not trained to find the door, they'll stay put for good.
at May 18, 2011 7 comments:

The following is the beginning of my attempt to explain the ideas of pre-existence that Abdu'l-Baha discusses in chapter 80 of Some Answered Questions: "Real Pre-existence". It's not finished, but is enough to make a worthy blog entry. It is certainly meaty! Heaven knows, I saw stars trying to work it out.

Pre-existence of cause and time

Pre-existence refers to the idea of something existing before something else.

If a thing is essentially pre-existent, this means that pre-existence is a necessary aspect of what that thing is. By definition, it 'pre-exists' or always already existed. It did not rely on anything else to bring it into being. It has no cause.

A thing that is temporally pre-existent is a thing that has always existed, stretching back throughout all eternity.

For example, Abdu'l-Baha cites the example of the sun and its rays. The sun in relation to its rays is said to be an essential pre-existence. There is an unequal relationship between them: the rays are dependent on the sun for their existence, but the sun is independent, for it does not rely on its rays for its existence. The sun pre-exists, or always already exists, from the point of view of its rays.